At one time in my past I had to qualify for Martin Marietta “A-Spec” soldering standards – that was hardly preperation for THIS microsoldering test. This gen gaming console heat sinks and makes soldering microscopic joints a SUPER challenge.

I quickly learned that mindlessly soldering, controlling heat, etc – isn’t all there is to really great soldering work. I’ve got to think like an engineer. The Xbox360 heat/cold cycles of main board caused so many failures! Sony saw this and learned! The main board for the PS4 has lots of thermal mass to act like a big shock absorber for these temp swings. This same thermal mass makes delicate fine soldering repair work on these boards VERY frustrating for the ill-equipped / unfamiliar would-be repair person. I admit: my first PS4 HDMI port replacement job (before youtube videos on it were so plentiful) – was a mess. There was almost speaking in tongues going on.

Removed original worn-out HDMI port with lots of home-made colophony / 99%IPA / Glycerin rosin flux and Rose’s Metal solder (Lead/Bismuth blend, extremely low temp solder that will blend with OEM ROHS no-lead solder completely to create a new eutectic mix that stays molten for long duration at temps that do not melt anything else around.

On data pins I use Mechanic 42%Sn/58%Bi no-lead solder that has low physical strength, good low-temp wetting, low bridging tendency – lead flows too flat for these data pins! – here, we want better pin/leg creep fillet build-up – why I chose no-lead, low-temp solder. Low temp solder used so I can use my hot air rework station at a temp that will not melt plastics, yet thoroughly heat-soak the board’s infamous heavy copper heat-sink difficulty.  Mechanically stronger Kester mildly activated flux core 63%Sn/37%Pb solder was used where needed: the four anchor legs. where a large tip on soldering pen could transfer enough heat into board substrates & ground plane copper layers. Procedure is VERY tricky on these! Get it right – and one runs the risk of making this look easy! (It’s still a very demanding job!) 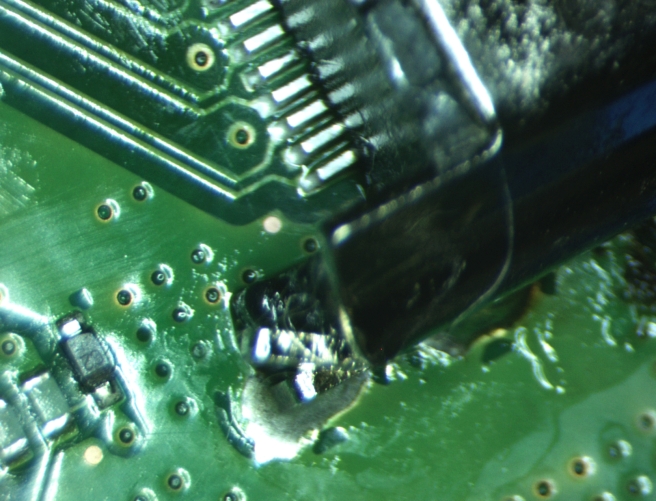 ($70 prices above is when you bring me the board – you take it out of the console, you put it all back together.)

Totally mod and rebuild an import PC Engine Duo RX incl. cdrom, caps, RGB, etc; You pay for parts, I do work for $150. Even rehab those old controllers so button press is perfect like new every time again.

Any game console in need of total refurbishment – working or not – we love to bring them back to day one, even NES 72 pin cartridge connector, clean up that browning of the plastics that happened over time…RGB mods, regional mods, rebuild of laser, remedy jailbars, build custom A/V cables, etc. Better than new! Never throw away an old Game console. The are probably good for at least some PARTS for someone else’s console-in-need. There’s great demand for some of these things if YOU don’t want it. If you ever once loved it – you will again…some day.